I once facilitated a high school literature class that included reading Annie Dillard’s book “Pilgrim at Tinker Creek.” Dillard begins chapter two by sharing that when she was a small child she’d sometimes hide a penny in her neighborhood for someone to find. She’d write out directions with chalk that lead to the penny, with statements like “Surprise Ahead” or “Money This Way,” and imagine the excitement of the person clever enough to follow the directions to the prize.

Later in chapter 2, Dillard refers to nature as providing “lots of things to see, unwrapped gifts and free surprises.” She goes on to say, “The world is fairly studded and strewn with pennies cast broadside from a generous hand.”

Dillard is suggesting there are all sorts of kindnesses out there just waiting for us to find. By simply being alive you are provided opportunities to be the vehicle of what Dillard calls “a generous hand” (substitute another phrase or word if you prefer), to strew some “pennies” out into the world.

But you better be careful. You may discover in this process that you find more pennies than you strew. 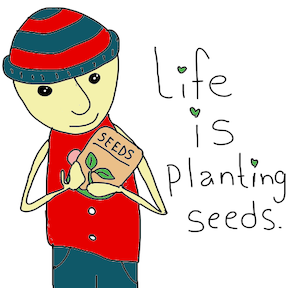 Several years ago I facilitated an online kindness class called Kindness Blessings that involved the reading of a book called “My Grandfather’s Blessings” written by Rachel Naomi Remen.

Early in the book (the first sentence in chapter one, in fact), Remen tells the reader that most people are given more blessings than they receive. I find this to be a very important comment and have spent a lot of time over the years thinking about it. To me, it means that we need to refine our ability to receive things. But I think it’s even more than that.

I think it has more to do with refining our ability to NOTICE things.

While facilitating that class I was laid flat by a stomach virus. I hadn’t been that sick for several years and, to put it in perspective, the prior time was with appendicitis, no fun and games. My wife and older daughter were away, and my younger daughter was home with me, apparently with the same bug. On top of that, we were away from home at the time, living in France for a year while on sabbatical.

Being sick and alone so far from home could cause one to feel very lonely. Instead, a neighbor showed up with bread and soup. Another friend not only asked if there was anything she could do, she phoned my daughter’s school to make sure they’d know she would be out for a few days.

Maybe these things sound small, maybe not. About seemingly small things, in “Pilgrim at Tinker Creek” Dillard asks, “But who gets excited by a mere penny?”

That’s our problem, isn’t it? We think that what we do or what we receive isn’t big enough, as if finding a penny hidden by a 6 year-old child isn’t a big deal. Dillard goes on to say, “It is dire poverty indeed when a man is so malnourished and fatigued that he won’t stoop to pick up a penny. But if you cultivate a healthy poverty and simplicity, so that finding a penny will literally make your day, then, since the world is in fact planted in pennies, you have with your poverty bought a lifetime of days.” 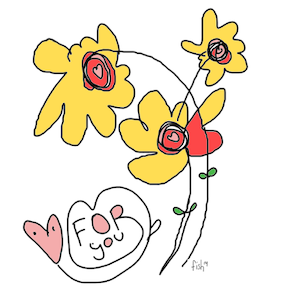 The look on my neighbor’s face when she delivered the food and the tone of concern on the phone when speaking with our other friend was moving. They may have been among the kinds of things that at one point in my life I would have missed or, worse, taken for granted. Instead, as I lay in bed back reflecting on my day, disturbed by periodic stomach cramps, I was filled with gratitude.

“The world is in fact planted in pennies.”

Now imagine these pennies as having been hidden by a child flush with the wisdom and purity of her youth, with signs pointing to them, signs that say, “SURPRISE AHEAD!”

Just how wonderful is THAT world?

So I think one of our roles in life is to anonymously plant “pennies,” surprises for people to find without them knowing we planted them. While doing that, I encourage you to imagine that everyone else is doing the same thing. With that in mind, don’t forget to notice those pennies and surprises meant for you, too, okay?

If this idea appeals to you, I encourage you to spend the two minutes it will take you to watch this video.